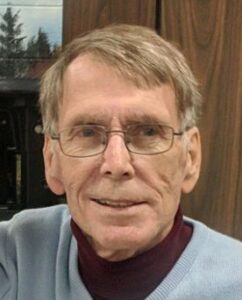 It is with great sadness that we announce the passing of Rick Edwards last Sunday, October 17th. Rick died peacefully at Heritage Hospice in Marietta, Georgia, with his son by his side.

Rick was a self-taught engineer who knew his passion at an early age. After returning home in 1968 with a Purple Heart from the Vietnam War, Rick studied briefly at the North Carolina School of Broadcasting, but then one day decided to walk into WTVD(TV) in Raleigh and convinced them to hire him on the spot. Over the next few years Rick got married (1969) and held multiple jobs simultaneously, most notable as an engineer for the UNC radio network where he frequently ran into a Clemson student named Ron Rackley in the press box when UNC played Clemson. Their only son, Jonathan, was born in 1973 and shortly afterwards, they relocated to Lexington, Kentucky where Rick worked for the UK radio network, was a radio network engineer at the 1977, 78 and 79 NCAA Men’s Basketball Final Fours and also dabbled in advertising production where he was awarded multiple Addys.

In 1979, Rick moved the family to Fort Lauderdale when he accepted an engineering position for Guy Gannett’s WINZ(AM) & FM. Gannett was based in Portland, Maine and operated four TV and eight radio stations around the country, which Rick travelled extensively to manage. However, Rick had plenty of projects in his home state. WINZ(AM) was granted an STA to increase power at nighttime to overcome Cuban interference which still applies today. Rick was successful in getting a similar nighttime power increase for station WPLP(AM) in Tampa, becoming the first station to operate with more power at nighttime than daytime. In 1985, Rick oversaw the construction of a new 1045’ tower for WINZ(FM) which was overdesigned to support not only three television stations and 10 FM stations, but many other RF services within its 17,000 square foot transmitter building. The tower utilized three 12-foot platforms and was the beginning of the vertical real estate boom. When completed, the facility transmitted more than 18 MegaWatts, the most of any single facility in the U.S. Rick was promoted to Director of Engineering and Vice-President. Shortly afterwards, Rick lobbied to relocate the nearby FCC monitoring station to permit a power increase for WINZ(AM) from 46 kW-DA to 50 kW-ND. In 1986, he oversaw another multiuse, tall tower project in the Orlando market and in 1989, Rick received a CP to upgrade Orlando’s WWNZ(AM) to 50 kW-DA. The FCC was not granting 50kW stations anymore, but more lobbying by Rick proved successful. Under Rick’s direction, the entire six-tower facility was constructed and operational in under 5 months. When Guy Gannett began selling off its tower companies in the early 90’s, Rick looked for other and exciting opportunities.

In 1996, the idea of CityScape Consultants was born out of the need for local government to have equal expertise to the cellular providers when it came to siting towers and to properly represent the FCC’s 1996 Telecommunications Act. Rick wrote the business model along with his long-time partners Anthony Lepore and Kay Miles sitting at his dinner table in Coral Springs, Florida. Together CityScape was created to serve local government exclusively in wireless infrastructure siting issues. Rick was passionate about his assistance with communities across the country in making sure they had the best professional representation. Rick loved his work; he loved his people and was proud of CityScape and its numerous accomplishments. Rick kept CityScape ahead of the curve with technology and through his years of experience, he saw wireless trends coming before the wireless industry.

Over the next 25 years, Rick relocated from Florida, to Raleigh, missed the warm weather and moved back to Florida, then ended his journey in Woodstock, Georgia in 2018 to be near his son’s family. He served as CityScape’s President/Chief Engineer up until this past August.

Rick was an amateur radio operator, member of AFCCE for almost 30 years, SBE and SMPTE. He has been an NFL game day coordinator, national frequency coordinator and Vice-President for SBE. Rick coordinated many Super Bowls, including Super Bowl XXXIV (Atlanta) when he invited the local FCC field office to come assist. It was the first time the FCC had been invited. It went so well that today, the FCC is a regular attendee at Super Bowls.

Rick enjoyed boating (was a certified captain), his cats and tinkering on many different projects in and around his house and on many types of (classic) automobiles. If you knew Rick, you knew his mind was always thinking of something to create or build—he could never sit still.

Rick is survived by his brother Reuben, Jr. and sister Charlotte (Kral), his son Jonathan and spouse, Jennifer (Ackerman), his grandchildren, Jack and Justin Edwards and his ex-wife, Jane. Donations can be made to the AFCCE scholarship fund or SBE on behalf of Rick. A celebration of life will be held in the Raleigh, NC area at a future date. For information, please contact: RLEdwards1947@gmail.com.