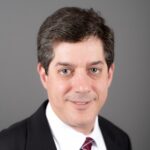 Jeremy Marcus serves as Deputy Bureau Chief in the Enforcement Bureau of the Federal
Communications Commission. Jeremy supervises the Spectrum Enforcement Division, shares in overseeing the Office of the Field Director, and leads coordination efforts to ensure the Enforcement Bureau can address increasing national security-related issues. Jeremy has vast experience in communications law, after serving 20 years at the agency and half a dozen years in the private sector.  Jeremy began his career at MCI Telecommunications Corp., working on local interconnection agreements.  He then spent several years in private practice at small law firms in Atlanta and Washington, D.C.  Jeremy began his FCC tenure in the Wireline Competition Bureau, where he served as a staff attorney, a front office legal advisor, Chief of the Telecommunications Access Policy Division, and Acting Associate Bureau Chief.  Jeremy also worked as Associate Chief in Broadband Division of the Wireless Telecommunications Bureau, where he focused primarily on making additional spectrum available for wireless broadband use.  Jeremy was then detailed to the Office of Management and Budget in the Executive Office of the President, where he served as OMB’s representative on a statutorily mandated panel assessing the costs and  timelines for federal agency spectrum relocation.  At OMB, Jeremy also began developing his knowledge of public safety and national security issues, participating on a team assessing FirstNet’s early business plans (OMB has a seat on FirstNet’s Board of Directors).  Jeremy then joined the Enforcement Bureau front office in 2014, first focusing on the work of the Spectrum Enforcement Division and then adding oversight of the Field Offices. Jeremy was promoted to Deputy Bureau Chief in the summer of 2022.

Reservations close midnight (Eastern) one week prior to the event.

A buffet-style menu with a meat (chicken or beef), fish or vegetable option to choose from.  Salad, dessert and Iced Tea/soft drinks/water is included.

Each luncheon is recorded and made available a few days afterwards. Come back to this page and look for the link below.