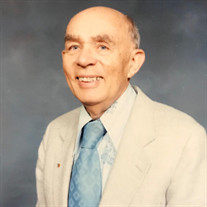 Condensing 97 years of a full life for an amazing man into a few paragraphs, is nearly an impossible task, for he is more than the sum of the milestones of his life. But, in an attempt to honor George Melvin Frese, we will do so.

George Melvin Freses was born in Spokane, WA, on June 5, 1921, to Fred and Sadie (Penner) Frese. George’s father was a City of Spokane police officer. George told stories of an adventurous childhood growing up in Spokane in the 1920’s.

His most told stories included his early experiences of listening to the radio with his mother on a crystal set, tuning into programs from around the country. George developed a fascination with the technology that enabled you to hear a person speaking hundreds of miles away. In his own words, “My number one ambition became to learn how this worked.” At the age of four, George began making crystal sets by dismantling old radios and using spare parts given to him. As his curiosity grew, so did his radios. In junior high and high school, he developed short-wave radio receivers, transceivers, and transmitters with increasing power and sophistication. As a junior in high school, he discovered that VHF radio waves reflected off of airplanes, allowing him to calculate how far away an airplane was, how fast it was traveling, and in what direction, naming his system “The Airplane Detector.” Eager to share this incredible technology, he naively wrote to the U.S. government and was disappointed when they did not respond. He then decided to share his “invention” with the government of England instead, believing it could be useful in their defense against the German Luftwaffe. This letter resulted in a visit from the FBI and the eventual military testing of his “Airplane Detector”.

George’s expertise in broadcast engineering led him to Washington State University to continue his education, graduating with a degree in Engineering. He was a proud Coug, able to belt out the Cougar fight song on command.

George met his first wife, Mollie, while in Pullman, WA. In May of 1944, George entered the Army, attended Basic Training and then Officers Candidate School. While stationed at Fort Monmouth, their first child, Joan, was born in November of 1944. His second daughter, Suzette, arrived in April of 1946. George’s military career was filled with unusual experiences and circumstances. Many are explained in his autobiography “Lost History and a Bizarre Mystery.” Following his military service, their son, Glen, and daughter, Lorene, were born.

George worked for KPQ as a radio engineer early in his career. George ventured out on his own, becoming a sought after engineering consultant of radio and television stations around the country. He is regarded as the father of modern broadcast audio processing for his invention of the Frese Audio Pilot, which was a pioneering breakthrough and improved the sound of a radio station’s broadcast signals. He obtained his first Amateur Radio “C” License in junior high. He was a proud and active Ham radio operator all of his life, with an Amateur Extra license, call sign AA7H.

In 1961, George married Rosemary Crimmins. Rosemary’s children: Richard, Linda, and Laurel Jacobsen joined the family. They were happily married for over 56 years. They were members of Central Christian (Cornerstone) Church most of their married life. George was an avid student of the Bible, having read it many times.

All of these milestones were the framework of a life well lived. But what made George special were the moments in between. He was goofy. He told us some of the dumbest “George and Joe” jokes, over and over, making us laugh. He truly cared about his family and friends. He worried about them and he prayed for them. He had more uses for duct tape than you can possibly imagine. He once gave Rosemary 100 numbered greeting cards, placed around the house as an apology. He was amazingly intelligent and could hold his own on just about any subject. He loved to exercise, playing organized softball and badminton into his 80’s. He was a master popcorn maker, enjoyed playing the violin, and playing classic music very loudly. He could “engineer” almost any device he needed. He was a good man, father, grandfather, and friend. He will be missed.