AFCCE News & Events
AFCCE / In Memoriam / Thank you, Byron, for your Friendship and Mentorship to our Industry
May 21

Thank you, Byron, for your Friendship and Mentorship to our Industry

The Association of Federal Communications Consulting Engineers joins in celebrating the life of one of our longest active members, Dr. Byron St. Clair, who passed away May 20th at age 93 after a brief illness. 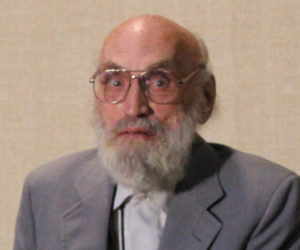 AFCCE President John Lyons said, “I had the pleasure to sit and speak with with Byron over the last several years discussing his time in NY while attending Columbia for his BS and MA in Physics. He reminisced about living on the waterfront and his enjoyment of education.  I will always remember the look on his face and the thrill in his voice as he walked around the broadcast facilities at One World Trade Center and 4 Times Square as we toured both facilities during the 2017 Annual Meeting.”

We will all stand to toast Byron at our Annual Meeting next month in Seattle.

The National Translator Association, will be establishing The Byron W. St. Clair Memorial Scholarship Fund along with the Association of Federal Communications Consulting Engineers (AFCCE). The fund will provide scholarships for promising undergraduate and graduate students at accredited U.S. universities and colleges interested in broadcast engineering. The LPTV Spectrum Rights Coalition, through its membership, has also agreed to provide funding for the NTA/AFCCE scholarship fund.

Dr. St. Clair was director of research and development for Adler Electronics, founder and president of EMCEE manufacturer and installer of TV translators.  Later he took his knowledge west to Colorado, and beginning in 1967 founded and was president of Television Technology Corp. in Arvada and later Larcan-TTC Inc. During his three decades in running TTC the company became the best-known supplier of TV translators.

Dr. St. Clair was inducted into the Advanced Television Broadcasting Alliance Hall of Fame in 2014, and received the Jules Cohen Award from the IEEE Broadcast Technology Society (BTS) in 2017. He was also President Emeritus of the National Translator Association and was the recipient of the SBE Chapter 48 Lifetime Achievement Award in 2008.  He received his PhD from Syracuse University in Physics.

He leaves behind Julie, his wife of 71 years, and daughter Susan Hansen of Arvada, Colorado as well as his son-in-law, two grand children and a brother.  A memorial service is planned for a date in June to be established.