THIS IS A NEW LOCATION FOR AFCCE LUNCHEONS.

Work on Single Frequency Networks (SFNs), called Distributed Transmission Systems (DTSs) by the FCC, began in 1990, shortly after the first all-digital television transmission system was proposed during the era of the FCC Advisory Committee on Advanced Television Service. The first filing with the FCC on SFNs was in 1992. After development of technology, construction of an experimental station, and numerous filings with the FCC, rules for routine use of DTS facilities were adopted in 2008. Despite a glowing recitation from the FCC about what DTS networks could achieve, the 2008 rules, by their nature, precluded many of the benefits that the Commission expected from DTS. The FCC hoped that DTS would overcome some of the difficulties that were becoming apparent with ATSC 1.0 stations, but the rules were put in place after most stations had completed their construction. Nevertheless, some DTS stations were built, difficulties were exposed, and lessons were learned.

Eight years later, development of ATSC 3.0 was nearing completion, and it was recognized that many of its advanced features would depend on strong and uniform signal levels for their successful operation. It also was understood that, if such strong and uniform signal levels were to be obtained widely, SFNs/DTS networks would be needed to get there. For a DTS solution to work, though, the rules for their use had to be changed. In 2016, a scheme for changing the rules first was proposed privately to broadcasters, with public discussions beginning the next year. Eventually, agreement was reached within the industry to petition the FCC for a change in the DTS rules based on the scheme that had been proposed within the industry. Quick adoption of the changes was recognized as needed to avoid the case with ATSC 1.0, when permission for use of DTS solutions mostly arrived too late. A Petition for Rulemaking was filed to begin the process. The FCC responded with a Notice of Proposed Rulemaking and, earlier this year, some changes in the rules. The changes provide significant improvements in what can be achieved with DTS but also have some limitations. To optimize the improvements that can be derived from use of DTS, both the benefits and limitations, as well as the provisions, of the rules changes must be understood. The presentation will address the why’s, the how’s, and the wherefores.

S. Merrill Weiss is a consultant in electronic media technology and technology management. After working in radio and television stations and networks for the first 24 years of his career, he has consulted for the last 30 years. For the last 53 of those years, in addition to serving his employers and his clients, he has helped to develop and standardize many of the significant technologies now used throughout the industry – ranging from use of voltage distribution in place of power distribution of analog audio signals, to RS422 machine control, to the fundamental digital video system on which nearly all subsequent systems are based, to component video, to the Serial Digital Interface (SDI) that has interconnected digital video facilities for the last 3½ decades, to the ATSC 1.0 and ATSC 3.0 systems, to the conception and design of Single Frequency Networks for television, and many others along the way. Merrill has written several books, published and/or presented several hundred papers, and received six US and international patents for RF transmission, including for SFNs. He is a fellow of SMPTE and is recognized by SBE as a Certified Professional Broadcast Engineer (CPBE). He has been the recipient of multiple awards from SMPTE, ATSC, NAB, and the IEEE Broadcast Technology Society, including its Jules Cohen Award for Outstanding Broadcast Engineering. He is a graduate of the Wharton School of the University of Pennsylvania.

Please note that there will not be an AFCCE-FCC reception this month nor will there be a Fall Social.  This is a luncheon event only.

In addition to the AFCCE meeting on Wednesday, later that day Gary Sgrignoli is teaching an ATSC 3 physical layer seminar at 5 pm at the NAB building in Washington DC and continuing the next day.  Click the link for more information and to register.

AFCCE Members may register to attend the luncheon meeting below. 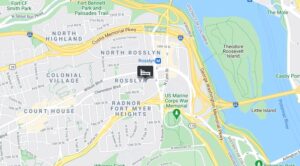 Metro Directions:
The Residence Inn is two blocks southwest of the Rosslyn Metro Station – Orange, Blue and Silver lines. Exit the station through the “back door” (up the stairs) and turn left onto N Fort Myer Drive, then right on 17th Street.

Lunch Menu
The Residence Inn will provide a buffet-style menu with a meat (chicken or beef), fish or vegetable option to choose from.  There is no need to pre-select an entree.  Salad, dessert and Iced Tea/water is included.