Rodolfo (“Rudy”) Bonacci was presented with the E. Noel Luddy Award for years of meritorious service to the telecommunications industry. Bonacci is Assistant Division Chief, Engineering, in the Audio Division in FCC’s Media Bureau. The award was presented November 30 at the Association of Federal Communications Consulting Engineers’ annual FCC Reception, held at the National Press Club by AFCCE President John Lyons. 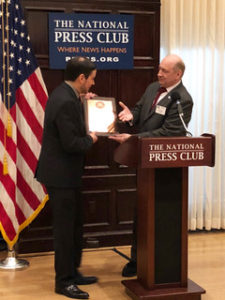 In his introduction of this year’s honoree, James Bradshaw, Deputy Division Chief, Engineering, in the Audio Division of the FCC’s Media Bureau, recalled the time from when Rudy joined the FCC to the present day and Bradshaw told anecdotes on Bonacci’s career and spoke of his prestige within the FCC.

Addressing the crowd of AFCCE members and guests, and FCC colleagues, Bonacci thanked the AFCCE for bestowing the award and expressed admiration for his colleagues, noting several whom he thought better deserved the honor than himself. 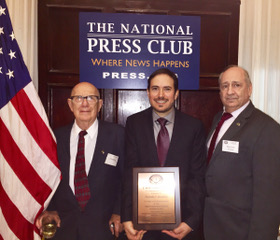